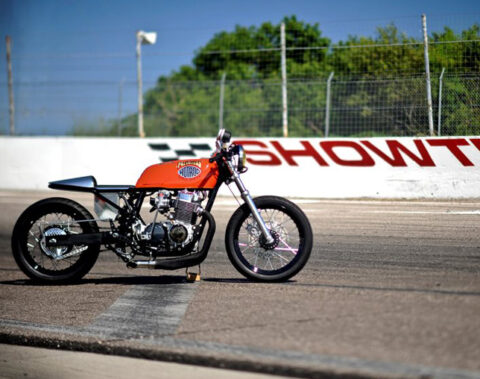 The Orange bike was the Face of Racing for Orphans for years and has quite a history. The Bike was street Licensed and titled in Florida. Riding this bike you will be the king of just about any bike night or event and attracted many fans to our booth and expsed them to our project of helping the Sheriffs Youth Ranch programs for years. The Bike was built as a project by Rev. Jim in Seminole Florida. The “Orange Bike”, as people call it, is a TV star. It was on 4 episodes of Café Racer TV filmed in 2012. The “Orange Bike” is race bike. It was raced at Valdosta Drags by 11 times World Champion Ricky Gadson and worked on by “Spiderman” Larry McBride, world record holder. It has raced at Bonneville and set an AMA land speed record in 1000MCF class, it has AMA number 1# plate. The “Orange Bike” is a show bike and has won The RATSHOLE Bike Show café racer trophy TWICE, once at Daytona and once at Leesburg. What other Bike have you heard of that has history like this? The “Orange Bike” found a new owner in Ft. Meyers, Florida and getting ready for some new history no doubt. 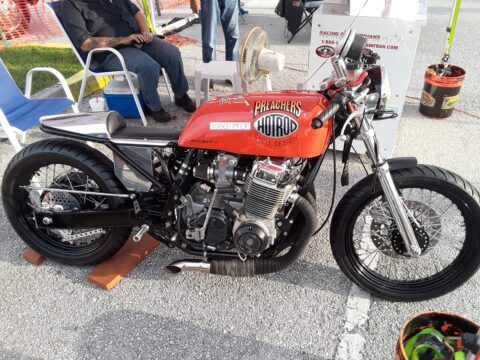 The Orange Bike on one of the many nights at Quaker Steak and Lube representing Racing for Orphans.